The History of Rose Hill

Rose Hill is a beautifully restored Winter Colony Estate in Aiken, South Carolina. The estate has a rich history from the founding family, the Phelps, to each owner following, in art, history, music, horticulture, cultural events, Southern hospitality and more. Rose Hill is the home of creating and nourishing organizations that have left a rich legacy in the City of Aiken, such as, the Girl Scouts of America’s Aiken Chapter, the Garden Club of Aiken, Garden Club of South Carolina, and the Aiken Center for the Arts and more. Over a century of determination, passion for natural beauty, giving, and accomplishment woven with a sensibility of reserve and elegant understatement provide a glimpse of timeless beauty and wondrous charm that is Rose Hill Estate.

The property on which Rose Hill now stands was originally owned by Confederate soldier Alfred Holmes and the original Antebellum home destroyed during the Civil War in the Battle of Aiken. Nearly thirty years after the end of the Civil War, the property and temperate climate caught the attention of the Phelps Family from the Northeast United States as the site for their winter home and Rose Hill was born. 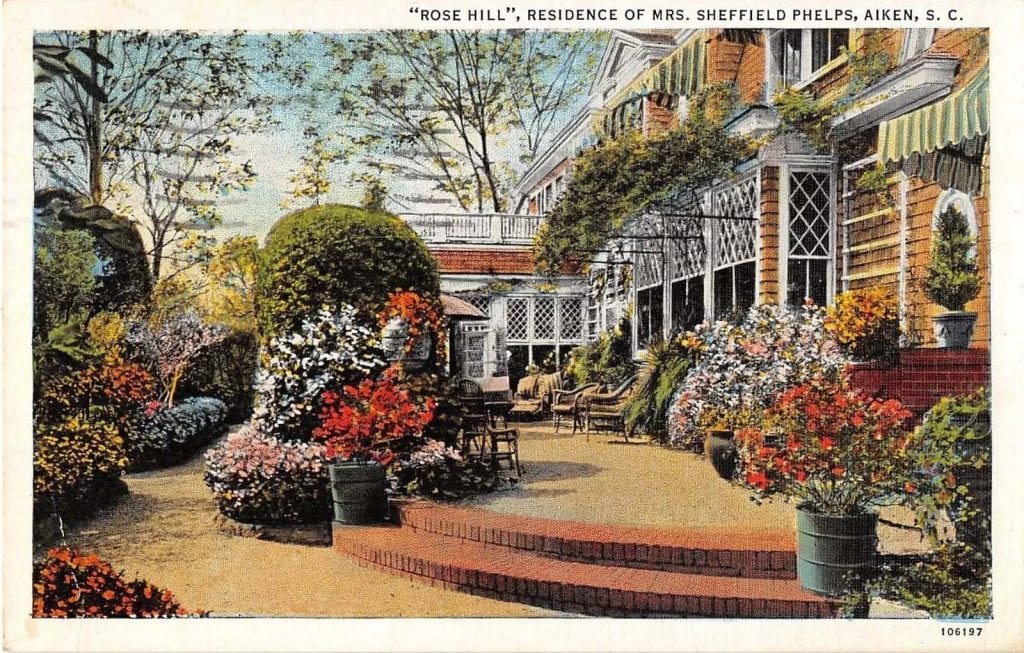 In 1898, Colonel & Mrs. Sheffield Phelps commissioned the construction of their city block winter home (four houses and eight outbuildings) atop the high point of Downtown Aiken. The Dutch Colonial Shingle Style architecture of The Main House (nearly 10,000 sq. ft.) is a unique find in the Southeast and was built over the remnants of the original Antebellum home. This home, named Rose Hill, later became the first property in Aiken to be listed on The National Register of Historic Places. The Phelps family resided at Rose Hill during the Winter Months with their three young children.

After the early death of Colonel Phelps, Mrs. Phelps made Rose Hill the permanent residence for herself and her children. Mrs. Phelps never remarried and became an avid gardener. In 1930, she organized and hosted the first meeting of the Garden Club of South Carolina at Rose Hill. Mrs. Phelps and her daughter, Claudia Lea, found a particular love for camellias and even developed a new variety on the Estate, the “Rose Hill Red.” Her daughter, Claudia Lea, fell in love with the easy and natural life of the region and made Rose Hill & Aiken her permanent home until her death in 1984. Claudia Lea founded the first Girl Scouts of America troop in Aiken with her friend, Juliette Gordon-Low, founder of the Girl Scouts of America.

Miss Claudia Lea was well-renown as a lover and sponsor of the West Highland White Terrier. She loved to train and compete with her dogs and served as the president of the West Highland White Terrier Club of America in its early years. Miss Phelps housed her prized dogs at The Rosstor Kennel, which had three locations, one of which sat on Rose Hill Estate. The Estate still boasts three original kennels which still have the outline of a dog door on the front door. 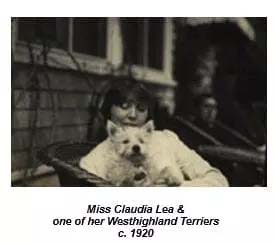 Thanks to Claudia Lea’s decision to become a permanent resident of Aiken until she died at age 90, Rose Hill has remained an intact walled city block with 12 original buildings and the original layout of the gardens. The structures and gardens sat untouched for several years until a wealthy gentleman from Dallas, Mr. Jones, came forward in the early 1990’s with a vision to operate a religious college on the property. His endeavor resulted in something spectacular for the future of Rose Hill. He made over $1 million worth of renovations to the Main House and Gardens that did not alter the integrity of the original property. Mr. Jones’ small, tuition-free college operated for several years at Rose Hill with a campus comprised of promising students, some of whom had even attended Ivy League schools.Unfortunately, the donations, which Mr. Jones had expected for the operations of the college, were not forthcoming and his investors backed out of the project. Rose Hill sat uninhabited until 2002, until the next set of visionaries came forward: Mr. Stephen Mueller and his mother Eva.

Eva & Stephen Mueller had resided in Aiken since the 1970’s and after careful conversations, they purchased an abandoned city block rich in history and re-purposed six of the buildings for use within the hospitality industry. They began at the top of the hill by converting the expansive Main House and Rear Gardens to provide accommodations and a private event space. Down the hill, a wedding chapel sits on the foundations of a greenhouse. The Carriage House now serves as a venue for smaller receptions & business meetings. A 2,500 square foot home on the property called, “The Greenville Cottage” is now available for short and long-term rentals. After an extensive renovation to the long-neglected stables and approval from the health department, the stables opened as, “The Stables Restaurant” in 2009.

In 2018, the property was  purchased by Ketan Patel, continuing the legacy established by Eva & Stephen Mueller. Mr. Patel worked diligently to preserve the legacy of Rose Hill, to renovate the property and return it to its former glory. In 2020, Mr. Patel sold Rose Hill to current owners, Andrew and Elizabeth Hobbs, who have continued with carrying on the legacy of Rose Hill as the new generation of Rose Hill opening all under new ownership starting in September 2020. Following the death of Miss Phelps, the goal was, and continues to be, to share a piece of history from Aiken’s Gilded Age past with the world.

Give the Gift of Rose Hill

Treat yourself or those near and dear
to you with the gift of Rose Hill
with a Rose Hill Gift card.
Purchase Gift Certificate